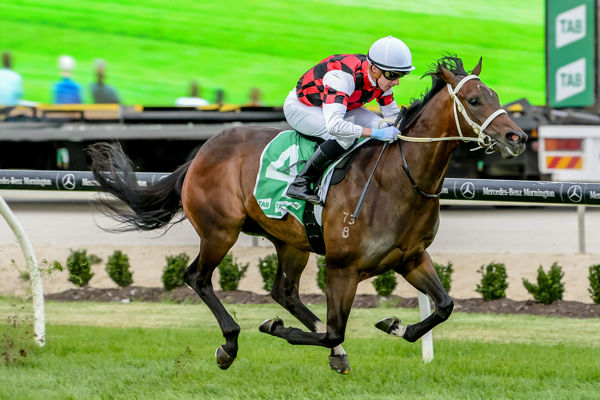 Making his second trip to the races, the Trent Busuttin and Natalie Young-trained He’s Xceptional created a huge impression in a 1000m 2yo maiden at Cranbourne of Friday to claim the honour as the first winner for Newhaven Park Stud’s Xtravagant.

With Daniel Moor in the saddle, He’s Xceptional was ridden hard in the early stages to cross to the lead. The gelding was entitled to feel the pinch when coming under pressure around the home. Instead, he kept up a strong gallop to defeat the Reward For Effort gelding Edge Of Reward by two and a half lengths with the Brazen Beau gelding Askew three-quarter of a length in third.

At his career debut back in October, He’s Xceptional was caught off the track when unplaced in the $500,000 Inglis Banner at Moonee Valley. Despite a torrid run, he stuck to his guns to be beaten just on five lengths behind Sneaky Five.

Bred by Seymour Bloodstock, He’s Xceptional was purchased by Clarke Bloodstock for $40,000 out of the Newhaven Park Stud draft at the 2020 Classic Yearling Sale.

He is the second winner from three to race out of the 3-time winning Sebring mare She’s a Danica.

A full-sister to He’s Xceptional was purchased by McEvoy Mitchell / Belmont Bloodstock (FBAA) or $150,000 at the recent Inglis Premier Yearling Sale.

An outstanding sprinter/miler, Xtravagant won the Group 1 New Zealand 2000 Guineas by eight and a half lengths in record time and the Group 1 Waikato Sprint by a similar margin.