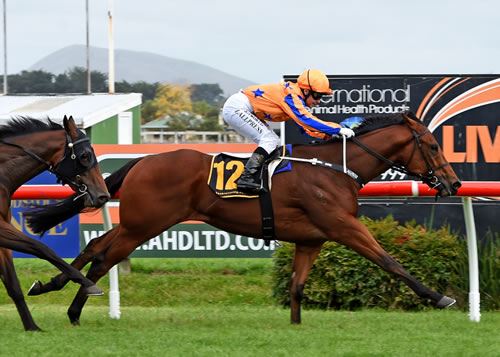 After witnessing a stylish win by two-year-old Total Excess at Hastings on the weekend, co-trainer Stephen Autridge admitted his thoughts immediately turned to Riccarton in the spring.

A $200,000 purchase by Te Akau Racing boss David Ellis at the 2017 Karaka Ready To Run Sale, Total Excess was making his raceday debut for Autridge and co-trainer Jamie Richards in Saturday’s 1200m contest.

Sent straight to the front by rider Lisa Allpress, the Delago Deluxe gelding never looked in danger as he comfortably held his rivals at bay to register a decisive victory.

“He’s a got a great attitude and we thought he would be prominent on what he’s shown at home, but you never know until they get under pressure on raceday.

“He looked like he was doing it well all the way and had them covered a long way out.

“All I was thinking about when they hit the line was how good would he look at Riccarton in the spring.”

Autridge was referring to the gelding taking his place in the 2018 edition of the Gr.1 New Zealand 2000 Guineas (1600m), a race where the powerful Te Akau operation has figured prominently in recent years including providing the quinella in 2017 with Embellish and Age of Fire.

“He looks to me like a natural 2000 Guineas type and that is where we will be aiming him next season,” he said.

“The team will get together on Monday and have a talk about what we do with him next which will make for an interesting discussion.

“We don’t really know if he will handle a wet track and that’s what we are going to strike from now on.

“We like to get the horses we have earmarked for races like Riccarton back in work in May so it could be a good time to send him to the paddock now but that is a decision the team will make when we have looked at all the options for him.” – NZ Racing Desk

By Newhaven Park’s resident stallion, Delago Deluxe, the 2YO gelding is the second foal out of Exceed And Excel mare, Avail. Originally sold by Newhaven Park at the Magic Millions 2017 Gold Coast Yearling Sale for $80,000 to NZ based Horse Feng Bloodstock Ltd, the young son of Champion South African sprinting sensation caught the attention of Te Akau Stud’s David Ellis after his impressive breeze up at the Karaka Ready to Run Sale. After breezing at 10.14, Ellis went to $200,000 in securing him for the Te Akau team.