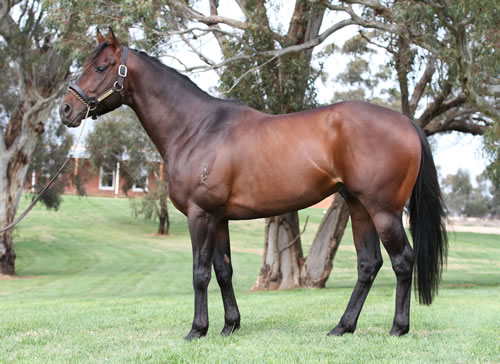 A brilliant early two year-old that won the 2014 Magic Millions 2YO Classic, Unencumbered fired up with his first two year-old trial winner with a fast finishing win at Gosford on Tuesday for well named colt Swoop.

Prepared by John Sargent, Swoop did just that, travelling sweetly back in the field before surging to the line for Andrew Adkins to win his 800 metre heat by half a length going away under her own steam.
Swoop was snapped up at the Magic Millions National Yearling Sale for a modest $30,000 by John Sargent and renowned good judge Paul Moroney, so will be Magic Millions eligible if he seeks to follow in the footsteps of his sire.

Swoop has some pedigree to back her up as she is from Katique, a half-sister to Group II winners Happy Morning and Fatal Attraction from the famed Princess Tracy (IRE) family that produced Australian Horse of the Year Typhoon Tracy.

Unencumbered yearlings were popular at the sales this year selling for up to $150,000 and joining the stables of many leading trainers.

More than a quarter of his first crop of two year-olds have already been named, so expect Swoop to be the first of many youngsters warming up for race day in the coming weeks.

Unencumbered is by Testa Rossa, out stakes winning More Than Ready (USA) mare, Blizzardly, and was purchased by Bjorn Baker from the Newhaven draft at the Magic Millions 2013 Gold Coast Yearling Sale for $70,000.