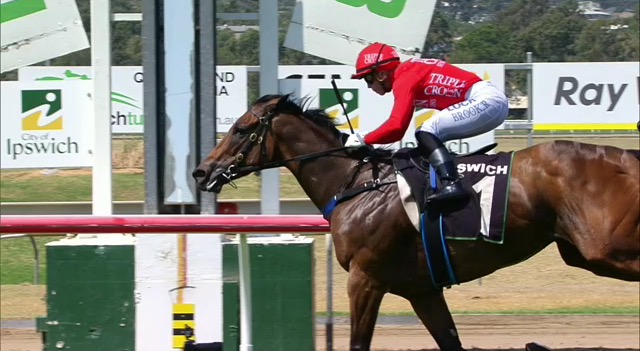 After being winless for more than 18 months, seven-year-old gelding Charlie Boy scored a great win on Saturday in the City of Ipswich Spring Sprinter’s Cup.

Now trained by Tony Gollan, Charlie Boy had 15 winless runs since February 2016 when he took out the Group 3 Liverpool Cup at Royal Randwick.

With Tiff Brooker aboard for the first time in his career, and at his first start at Ipswich, Charlie Boy was able to knuckle down in the final 100 metres.

Charlie Boy has had a string of former trainers including the Snowdens, Ciaron Maher and Gerald Ryan, before making the move to the stables of Queensland’s premier trainer, Tony Gollan.

Charlie Boy is by Myboycharlie out of the unraced mare Maritime (Falbrav). A daughter of Flight Stakes winner Pontal Lass, Maritime is a half sister to the Wakeful Stakes winner Quays.

Charlie Boy was bred and sold by Newhaven Park at the 2012 Gold Coast Yearling Sale to Triple Crown Syndications for $80,000.